We are dealing with the estate of A. She died in 2019. In 2003 she created a trust, putting her house into trust for herself for life and then to her two adult children in equal shares absolutely. This provision is immediately followed by an “Overriding Power” exercisable “notwithstanding the foregoing” at any time during the trust period (80 years). Can the trustees now, a year after the death of M, exercise that discretionary power in favour of others, or did the children’s absolute interests vest in them immediately upon the death of M, thus excluding the possibility of using the discretionary power? The children are called “Capital Beneficiaries”. There is the usual list of “Discretionary Beneficiaries” and the trustees wish to benefit some of them. There is no Expression of Wishes.

Without knowledge of the actual wording from the trust instrument, any answer can only be guesswork.

Paul,
Thanks for your comment.
I was thinking more in principle, could you ever exercise a discretionary power after an absolute interest has already vested - isn’t that shutting the stable door etc, etc …

However, attached are copies of the two essential pages. I cannot see anything else in the trust document that impinges upon these provisions. 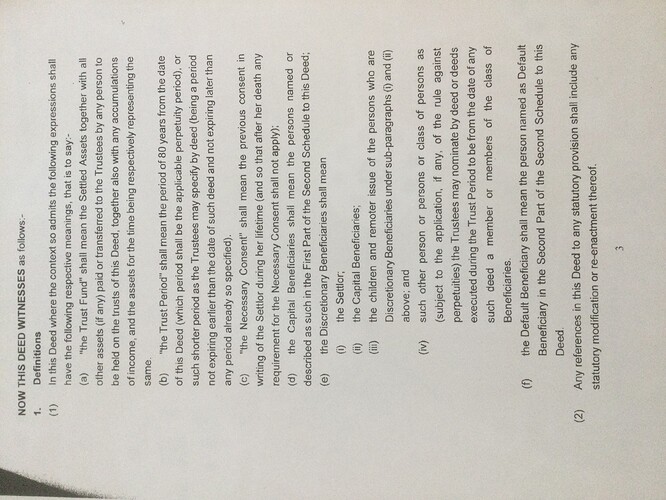 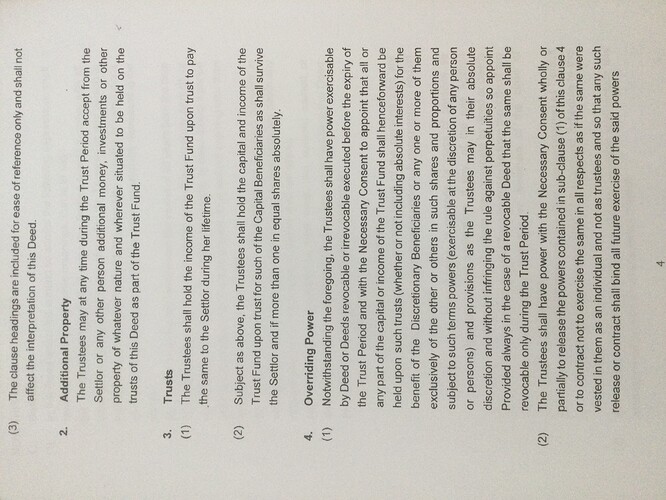 “Notwithstanding the foregoing” in clause 4 (1) is the clue. The interests in clause 3 are vested but subject to defeasance.

Although I have not been able to view the pages (firewall has blocked them!), it seems to me that if the trust document gives discretionary powers exercisable during the trust period then the interests of the children must be subject to being divested if the powers are exercised. In the meantime, they have interests in possession. This kind of scenario is similar to the old fashioned trusts for life assurance investment bonds where there were discretionary powers in favour of a wide class of beneficiaries but the default beneficiaries were the children in equal shares. This gave the default bens interests in possession and so the gift into trust was a PET. However, since the changes in 2006(?), such trusts became relevant property trust and so they have fallen out of fashion.

There is a remarkable ambiguity in the definition of ‘Necessary Consent’ in clause 1(1)©. One reading is that on the settlor’s death there can be no consent. Another is that any requirement for a Necessary Consent lapses.

If the first analysis is adopted, there will be some interesting discussions with HMRC during the lifetimes of the Capital Beneficiaries, and probably on their deaths. Divorce lawyers and creditors might also be interested.

Based upon the wording from the settlement, the clause 3 beneficiaries do not have absolute interests. Those entitlements can be cut down, and even completely extinguished, by the exercise of the clause 4 powers.

I wonder if the settlor is a US person, as they are settling a flexible life interest upon themselves. I have seem similar provisions in the past where the individual has been advised to make what, in the US, is termed a “living will” in order to avoid US probate procedures. If the settlor might be a US person, the trustees should take advice to ensure that they are compliant with any additional reporting obligations this will give rise to.

Thanks for the helpful comments. The Settlor was a UK citizen/resident/domicile, so no US involvement.

What then could be the point of drafting apparently absolute interests only to say in the next breath that they can be defeated at any time in the next 80 years? Surely it would be better better that the trust simply became purely discretionary upon the death of the life tenant, with the Capital Beneficiaries included, and (as is the case in this trust in fact) the same two beneficiaries (or their estates ) as default beneficiaries. As you point out, if the trustees delay deciding what to do with their discretionary power over the fund, at what point (at least before 80 years) would there ever be finality? Is there some point to it that we are missing?

John - I’ve always found this arrangement a little odd but it’s pretty common. I think the main point is to signal that the named absolute beneficiaries are the default beneficiaries who should benefit absent a good reason. It also gives them an IinP in the meantime.

Apologies. The Defaut Beneficiaries are not the same as the Capital Beneficiaries. Having now looked atteh deed again post – Christmas, II see the Deafulat Beneficiary is “any UK charity”

This trust seems to raise so many different points of principle. You suggest that, whilst leaning towards the absolute beneficiaries ( who are indeed the ultimate default beneficiaries as well as the Capital Beneficiaries) the discretionary power could be exercised ( if for good reason) even if the beneficiaries have an interest in possession. Others have indicated that the power could be exercised even if the interests have already vested. Is there a difference between a vested interest and an interest in possession? All the interests under the trust became vested as soon as the deed was executed - so, if either of the Capital Beneficiaries died before the life tenant , their interest, having already vested, would pass to their estates, and presumably would become an interest in possession when the life tenant does eventually die?

On a separate point, one of my colleagues has raised the question of whether the trust must be treated as having ended upon the death of the life tenant, when the absolute interests took effect in possession. If that were so, the discretionary power could only have been exercised during the life tenancy, since it clearly states that it an be exercised only “during the trust period”.

It seems to me that there must be absolute answers to some of these issues, but I am yet to be clear what they are!

The trust was drafted by Chancery Counsel, so it is tempting to ask him for his analysis of his trust.

The beneficiaries’ interests are vested subject to being divested – a long standing concept that allows considerable flexibility.

Until the 2006 IHT changes, many standard life policy trusts relied upon this concept. Flexible life interest trusts are but one example of its current usage.

A careful reading of the trust instrument will be required as, whilst many interests arising may appear absolutely vested, they will still be subject to the trustees’ discretion to divest the beneficiary of that interest.

The ultimate absolute vesting will only occur at the end of the trust period, which the trustees are often given power to bring forward, or if the trustees have a power to advance or appoint to beneficiaries free of the trust.

Of course there is no difference between a vested interest and an interest in possession. The concept of a vested interest in possession that is nonetheless subject to defeasance is as old as Chancery practice itself. Mr James Kessler QC employs the concept in his draft precedents and Chapter 11 of the 14th edition of his book has the commentary. This would be general information at modest cost but on the specific trust there is no substitute for consulting the Learned One who drafted it. Clients sometimes think the instructing solicitor should have known the answers Counsel provides at their expense.Just saying!